A three-part series of articles about the Power Choke Tester DPG10/20 series has been published in the well-known trade journal “Bodo’s Power Systems”, which specializes in power electronics.

The third part appears in issue 03/2022. It is shown how, with the help of the 3-Phase Extension Unit, the pulse measuring principle of the DPG10/20 series can also be used to measure the inductance of 3-phase chokes. A comparison with the conventional measurement method with mains voltage and mains current shows that only the pulse measurement principle can deliver correct measurement results in the non-linear range and what other advantages it has.

New features and improvements for the DPG10/20 series

The DPG10/20 series is continuously developed and improved.

The resolution of the DPG20 series is now 1 µΩ with a maximum measurable resistance of 3.5 Ω. 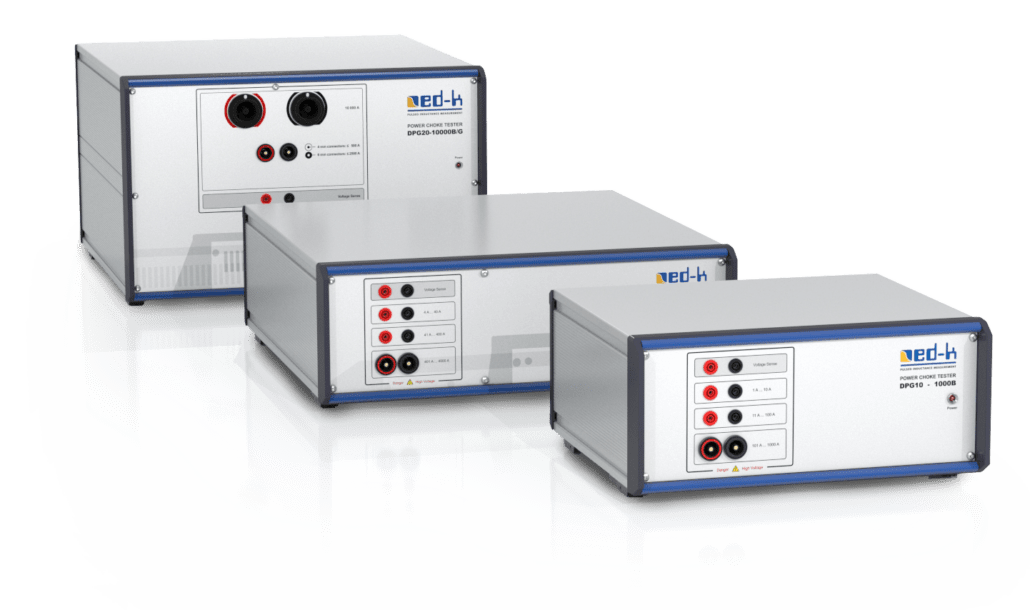 In addition, the time for a complete measurement cycle could be shortened by several seconds when connected via USB. This is a great advantage, especially when used for routine tests in series production, as the throughput can be increased considerably. But the time advantage can also be felt in the laboratory for individual tests.

The status of the Safety-Lock-Interface (DPG ready / DPG locked) is now displayed on a traffic light on the user interface.

We have been connected to the Cluster Power Electronics within the ECPE for many years. At cluster seminars and workshops, for example, we gave presentations on our core area, inductance measurement on inductive power components. From 2014 to 2015, we exhibited at the joint stand of the ECPE during the PCIM fair in Nuremberg.

We are very happy to be official key player in the Cluster Power Electronics within the ECPE now.

Already over 2 years ago we announced that we would develop a new model of the Power Choke Tester DPG family with a measuring current up to 10kA and a significantly increased pulse energy up to 15kJ.

The enormously high measuring current, which can rise to 18kA in the event of a short circuit, and the very large pulse energy have made a completely new development with a new circuit topology necessary. The circuit topology of the DPG10 series was maxed out at currents up to 4000A and 8kJ. 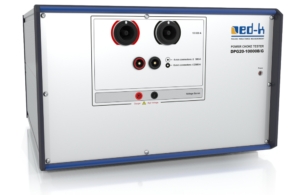 The development was technically extremely demanding. For example, to develop a current sensor that can map the slope of currents up to 18kA with current slew rate up to 1000A/µs and pulse widths from 3µs to 300ms with very high precision. Despite the extremely large measuring currents and the large pulse energy, we were able to integrate the electronics in a very compact housing of only 47x50x34cm³ (41kg).

Unfortunately, the development took longer than planned because the enormous growth in sales over the past two years has repeatedly affected development work. The first device was delivered in Q4/2019. In the meantime, several devices are successfully in service at well-known customers and have proven themselves in practice. The Power Choke Tester DPG20-10000B/G is now available at short notice.

More pulse energy for the DPG10 B series 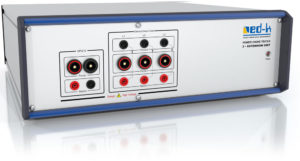 Warranty extension from 2 to 4 years

Normal wear and tear of test leads and improper use are excluded from the warranty. For the duration of the warranty period, we repair devices free of charge.

It did take a bit longer than we had hoped, but the new 3rd generation software is now ready. It offers an entire new graphical user interface with a larger area for displaying the measurement diagram and improved handling via an uncluttered toolbar. It is compatible with all models of the DPG10 B-series.

The new software generation furthermore offers additional measurement functions, such as the representation of flux density B(i), and will be continuously updated over the coming years. As always, our software updates are available free of charge on request.

We have again extended our range to include higher currents and pulse energies. The DGP10-4000B/F delivers measurement current up to 4000A. At 7500J, pulse energy has tripled as compared to models with option /E. The device is nevertheless very compact, measuring 3HE and weighing little more than 21 kg (47x50x17cm³)!

This equips the device work with very large inductors into the MVA range. At the same time it is also perfectly suitable for small PCB mounted inductors in the smaller measuring ranges of up to 400A and up to 40A. It thus covers an enormous spectrum of inductive components. Inductances can even be precisely measured all the way down to the nH range.

The DPG10-4000B/F is controlled via the same high performance software as the other models in the DPG series. 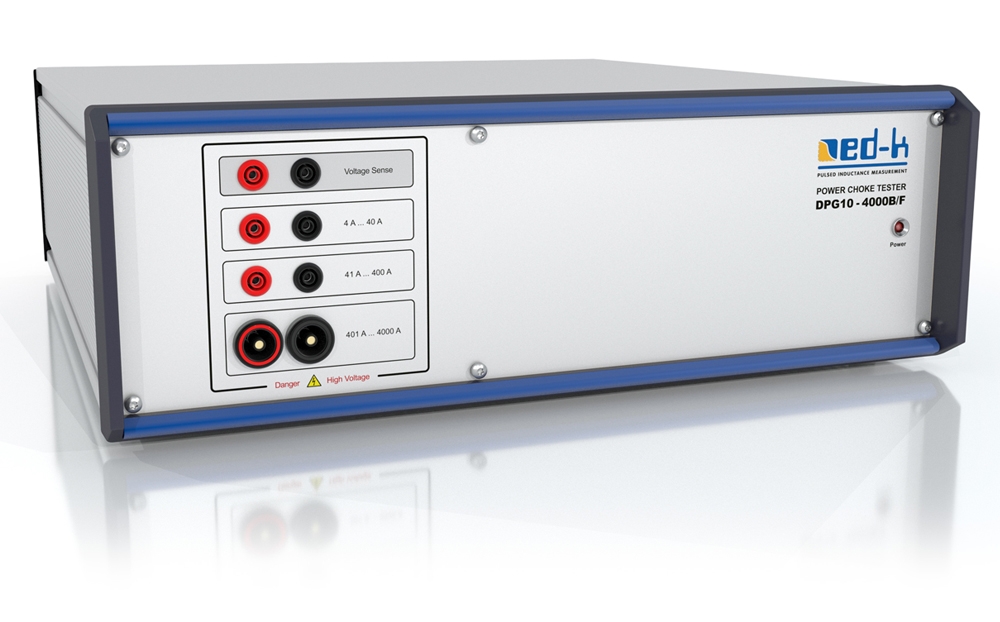 The DPG10 A-series has been discontinued.

We have extended our range of models to include higher currents. The DPG10-3000B/E delivers measuring current of up to 3000A and pulse energy up to 2500J. It is immediately available.

It is controlled via the same high performance software as the other models of the DPG series and was also kept extremely compact. The largest measurement range is equipped with special 6mm connectors; we also offer new, corresponding cables for them. 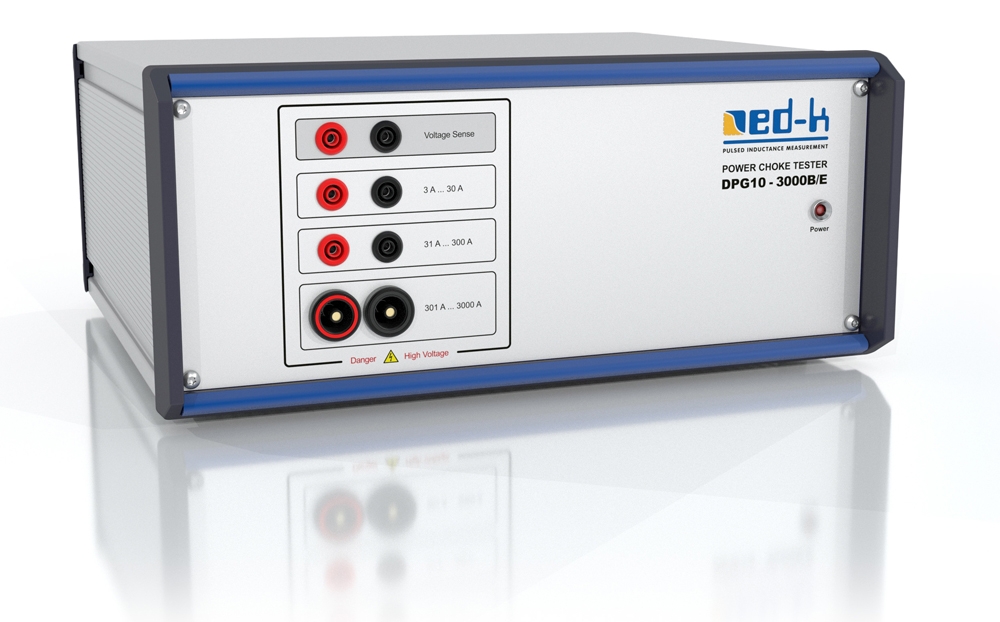 At the end of July 2016, we moved to new premises, because the previous ones had become too small. Especially storage capacity had become inadequate for a while.

The move occurred within the same commercial complex, so that our address and all contact data have remained unchanged.

The new domicile was given a full makeover and was partitioned and equipped according to our requirements (such as ESD flooring and special illumination). The available floor space has almost doubled as a result. Since the entire complex has also been fully refurbished, we look forward to working in a very pleasant environment.